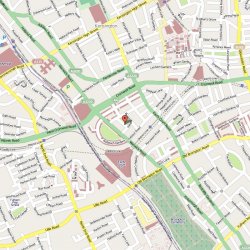 The owner is being purposely deceptive with his website, I'm sure to distance himself from the bad reviews here. I checked TripAdvisor and didn't see anything about Kensington Court Aparthotel. I booked the 2 bedroom place for 4 nights, at 200 pounds a night. We had been traveling for 3 weeks without being able to wash clothes, so that was one of the sellers for this place. I also liked the free wifi, the location and love quirky old places that don't have a hotel feel. However, I had a bad feeling about it right after I booked and found the reviews of Kensington Park Apartments and realized they were the same place. I tried to cancel my reservation, but I would have had to forfeit 1/2 the total, even though it was only 15 minutes later. We bit the bullet and went anyway, hoping for the best.

When we arrived, the owner said he had upgraded us to a 2 bedroom 2 bath place instead. Room 13 was on the top floor, a flight of stairs above the elevator. The flight of stairs was narrow, but he had still managed to cram a mattress in it (see pictures).The website says there is a lift to all floors, an outright lie. He told us we could choose between that one and the one we had booked, a 2 bedroom 1 bath on the 1st floor, room 8 and room 13. Room 8 was tiny, 2 rooms with only enough room for a double bed and no walking space and a miniscule kitchen. We opted for room 13 and lugged our stuff up there. We were dismayed to find stained carpet, walls and furniture. There were holes in the walls and sheets, green globs on the wall and ceiling, flaking paint on the windows and a stain on the wall where someone had thrown a wet clothing item (a shirt?) which was still wedged between the wall and the desk. We were provided with 4 thin and tiny towels and never had replacements. The satellite TV didn't work, so we only had a few channels. The "Video Entry System" promised on the website is a mystery to me, is that a DVD player? The wifi didn't work and the owner wasn't available to ask. He basically disappeared after we paid, maybe to go spend our money. We tried to use the washer and it didn't spin, so after all that research to find a place with a washer, we were out of luck. The dryer didn't work either and we had to hang our clothes all around the apartment in order to dry them. We had a problem finding parking and called the owner about it. He was rude on the phone and told us to figure it out on our own. I mentioned that there were holes in the sheets and said, "Yes, that's because they're old." Really?! Then he proceeded to tell us what a great deal we were getting - 3 rooms!

Do you know anything about Kensington - Earl's Court area? Is it a decent place to stay in London? | Yahoo Answers

Kensington is plush and Earl's Court is very central - as mentioned. The reason for the cheap rooms is that London has more visitors than any other city (15 million a year). With the credit crunch softening visitor numbers, it's better to have full hotels making less money, than no money at all - so prices are very competitive. The weak pound is also helping to attract visitors - making London the best bargain shopping destination at the moment. As a result of these cheap rooms, visitor numbers are up on last year (against all the odds).
Take advantage while it remains cheap, especiall…

The Orchard is a tea room and tea garden in Grantchester, near Cambridge, serving morning coffee, lunches and afternoon teas. Since opening in 1897, it has been a popular retreat for Cambridge students, teachers and tourists, as well as locals, with many famous names among its patrons. The Orchard is open every day of the year (with the...

A Indomada is a Brazilian telenovela produced and aired by Globo February 17 to October 11, 1997. Authored by Aguinaldo Silva and Ricardo Linares, with the collaboration of Maria Elisa Berredo, Mark Silver and Nadotti Nelson and directed by Marcos Paulo Roberto Naar and Luiz Henrique Reis, had the general direction and core Marcos...

The Juno Awards of 2005 were held April 3 at the MTS Centre in Winnipeg, Manitoba and were hosted by comedian Brent Butt. Avril Lavigne and k-os won three awards each, while Billy Talent and Feist won 2 apiece.
Nominations were announced 7 February 2005.
The Tragically Hip were this year's Canadian Music Hall of Fame recipient. Dan Aykroyd was...