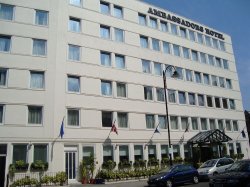 So that was our day. Big one huh. And the internet had been playing up, so I didn't get to send the blog when I wanted to. We are now in York again, so I will do the blog for today's adventure next.

We drove around London seeing the sights. We passed by Harrod's department store. The tour guide told us of the lion cub they sold a man in the 1970s (see YouTube video). Her quote: "That takes the biscuit!" We passed by The Ritz (3 months advance reservation for tea) and Trafalgar Square (the center of London). The tour guide explained that London was founded in 43 A.D. by the Romans. The city was one square mile. In 1066, Edward the Confessor ("a holy ...

They had to wait for Graham to leave before they could go home.
I asked how will you know when he's ready for home. Well, he will walk past with his two dogs. And sure enough, in the middle of our laughter, Graham trots past our table in his trackies, two dogs under leash.
'Night Graham', we all chorused.
He said ' goodnight'.

... trying to hold it together!! - There were three lovely guys sitting up the back as I was closing early. I didn't mind packing up around them because they were great to chat to. When I eventually had to get them out, I told them that I would remember them next time. So, Dom Adam and Alex...be warned. P.s - thanks for helping me stack the chairs! So wasn't expected but very much appreciated. - there was a lovely guy from Australia (he didn't sound it) that I ...

Ajose Olusegun is a Nigerian-born British professional boxer. He competed for Nigeria at the 2000 Sydney Olympics Games reaching the 2nd round. As a professional he is unbeaten and is the former British and current Commonwealth light welterweight champion.
Ajose began his career as a professional in May 2001 at the Royal Gardens Hotel in...