The Ambassadors Hotel is uniquely located in Earls Court, bordering with pulsing neighbouring areas such as Knightsbridge, Kensington, Chelsea, Kings Road and Fulham Road; Chelsea Harbour for a
glimpse of the Thames, with the Chelsea Football Club providing an all-purpose venue.

The Natural History Museum exhibits a vast range of specimens from various segments of natural history. It is one of three large museums on Exhibition Road in South Kensington. The museum is home to some 70 million life and earth science specimens – considered to be the world’s most renowned centre of research – Free Admission.

The Victoria and Albert Museum, is the world’s largest museum of decorative arts and design, housing a permanent collection of over 4.5 million objects – located in an area known for its association with Prince Albert, and named “Albertopolis”, which includes the Albert Memorial, the Natural History Museum, the Science Museum and the Royal Albert Hall which are all a mere stone’s throw from there – Free Admission.

The Science Museum, located in Exhibition Road, holds a collection of over 300, 000 items, including Stephenson’s Rocket and Puffing Billy (the oldest surviving steam engines), the first jet engine, a reconstruction of the prototype model of DNA, the first prototype of the 10, 000-year Clock of the Long Now, and documentation of the first typewriter – Free Admission

Hyde Park and Kensington Gardens are a leisurely saunter from Exhibition Road – probably London’s most famous park, it stretches over 142 hectares of tranquil garden space, where Nature, Art and History blend, crowned by the Albert Memorial and the Royal Albert Hall, home of much of Europe’s favourite music.

The Portobello Market in Notting Hill Gate is a must visit for market lovers; if you are an Antiques enthusiast, or Bric-a-Brac…! 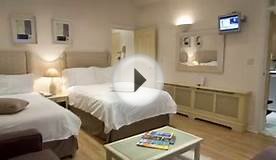